If you are looking for a place to discuss social dynamics in the math department, surround yourself with empathetic peers, tell us what inclusivity means to you, join us on Sunday, November 1 at 3 pm. We will talk about our experiences in the Harvard math department in the Office of BLGTQ Student Life in … END_OF_DOCUMENT_TOKEN_TO_BE_REPLACED

On Wednesday, October 28 from 6:30 – 7:30 pm, Kate Jenkins from Akamai will run a discussion about issues that women in math face. The event will be held in Emerson 108 and dinner will be provided. All genders and concentrations welcome! 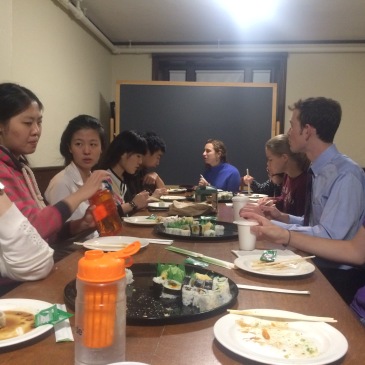 On October 20 from 6 – 7:30 pm, a community dinner was held in the Lowell Coolidge Room. Sushi was served! Around 20 students were invited to attend, mostly females interested in math, and discussions were held about gender issues to help build a tight community of women in math.

On October 13 from 6 – 7 pm, Dartmouth Professor of Math Carolyn Gordon talked about her research “You can’t hear the shape of the drum” and address the importance of confidence for women in math. Dinner was provided. Around 10 – 15 students attended; here are some photos from the event.

Our social kickoff event was be a brunch held in the Lowell Junior Common Room on Sunday, September 27, from 11 AM to 1 PM. Felipe’s burritos and smoothies were provided. Around 15 students attended and there were many engaging discussions about the future of GIIM, the math department, and life in general.

The second event in the speaker/discussion series was a data science and diversity tech talk hosted by Facebook on Tuesday, September 22 at 6 pm in Fong Auditorium, Boylston Hall. Around 20 people attended the talk. The Facebook Analytics team performs large-scale data analysis, identifies actionable insights, suggests recommendations and influences the direction of the … END_OF_DOCUMENT_TOKEN_TO_BE_REPLACED 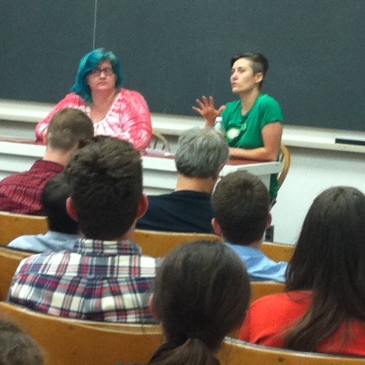 The Fall 2015 speaker series kickoff was held on Monday, September 14, at 6:30 – 7:30 pm in Emerson 108. It featured Professor Moon Duchin (Professor of Math at Tufts University and Harvard BA ’98 in Math and Women’s Studies) and Cathy O’Neil (author of the popular blog mathbabe.org; Harvard PhD ’99 in Mathematics) discussing … END_OF_DOCUMENT_TOKEN_TO_BE_REPLACED

GIIM hopes to host an undergraduate women in math conference during the 2015-2016 school year. This conference would invite women interested in both pure and applied math from all around the New England Area and include academic speakers in math as well as panel discussions of gender issues in math.

On March 7, 2014, the Harvard Undergraduate Math Association (HUMA) and the Society for Physics Students co-hosted a women in math and physics social. Around 15 students attended and got to play board games and munch delicious snacks. Starting in 2015, GIIM will begin running socials like these and others for female mathematicians at Harvard.

A panel to begin discussion of the gender gap in math within Harvard in response to the survey was organized by co-presidents Meena Boppana and Vikram Sundar and project co-chair Cherie Hu. The panel consisted of Prof. Gigliola Staffilani, a professor of mathematics at MIT, Rediet Adebe, a graduate student at Harvard in computer science, … END_OF_DOCUMENT_TOKEN_TO_BE_REPLACED